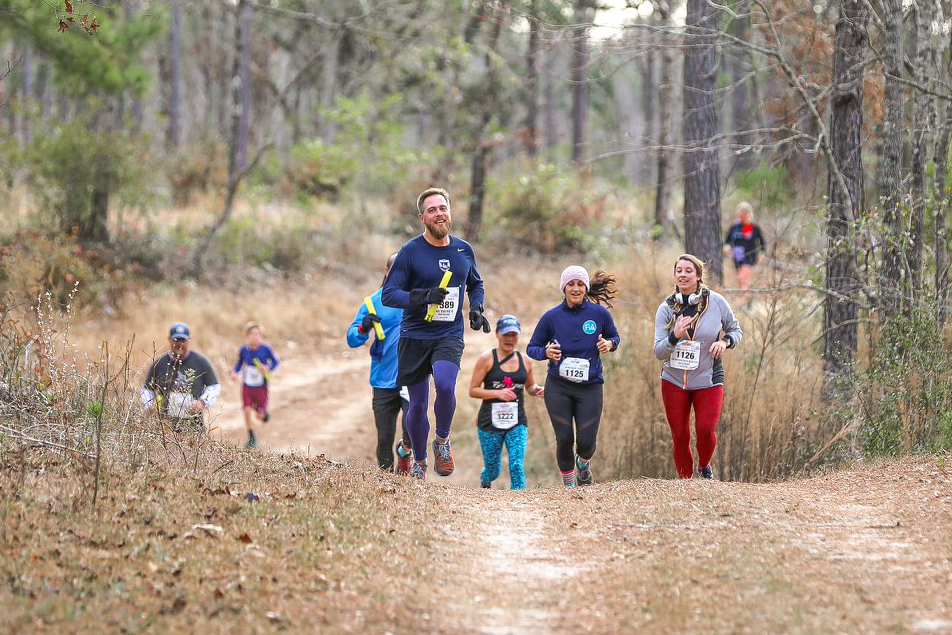 With many organized races either canceled or rescheduled due to COVID-19, I thought it would be fun to relive one of my all time favorite events.

This past January I had the opportunity to run a 5-mile leg of a 10-person, 50-mile relay.   The relay was part of the Southern Tour Ultra event held annually in Wilmington, NC.  Although I had a blast during the inaugural year in 2016, I had not participated since and did not plan to attend this year either.  Not because I didn’t think it would be a good time, but more because I try to be intentional about minimizing race costs and overall strain on my family.  As an ultra runner with increasingly insane goals, both the cost of events and additional time needed to train seem to increase accordingly.  So, when I was asked to join a team on short notice due to some last-minute cancelations, I was reluctant…but it’s hard to argue with cheap and local…especially for trails!  Without a good excuse not to, I jumped in to help and I am SO grateful that I did!

Long story short, this event just rocks.  It is essentially a weekend camping festival that revolves around 50 mile and 50K individual events, but it draws a ton of people to participate in the 50 Mile team relay event.  That’s where the real party is.  I’m talking 80+ teams, a huge bonfire, live music, tents popped, food on the grill and beer on tap.  Everybody knows somebody, some know everybody, camaraderie is at an all-time high, and the running trail wraps through beautiful woods with glimpses of the intracoastal before circling back to the festival grounds.  Near perfection.

Not only did I get to hang out with some great friends, but I ran a surprisingly fast loop for my new team.  Well…fast for me.  I met most of my teammates that morning, so I desperately did not want to let them down by posting a slow time.   No pressure, right?  As soon as I got the relay baton in my hand, I darted out of the corral and onto the course.  I knew people were watching so I tried to balance giving the appearance of a strong start without redlining from the get-go.  I was about 15 seconds in before I realized I had been so engrossed in the commotion of the handoff that I had not even started my Garmin.  Rookie move.  I got it started and settled into a good rhythm.  When I heard the beep signaling that I had knocked out the first mile, I looked down to see 7:17.  Not bad for soft dirt, but I told myself that I needed to pick it up a bit.  I focused on staying loose, keeping a quick turnover, and felt smooth for the next half mile or so…and that’s when things got interesting.

Right about that point in the course, there is a great out-and-back leg that leads runners into an oyster field just prior to the turnaround point.  I was lucky enough to be there at low tide, but the mud was still thick, and I really had to watch my footing on all the shells.  I have no doubt a fall would have been catastrophic.  But that wasn’t what startled me.  In fact, I was making good time and passed some of the competition charging through the mud.  On the way back from the turnaround point I had the benefit of seeing any runners that were close behind, and there she was.  I am guessing she was a high school runner and if I had seen her walking down the street, “threat” would have been the last word to come to mind.  But on this day?  The look on her face and the way she clutched that yellow baton made her look like the female Terminator closing in for the kill.  Pure determination.  She was moving quick and I knew immediately that I had better turn on the afterburners or I was toast.

The miles ticked off…7:07…6:59…6:56…I gave it just about everything I had.  We had all been warned before the start that the “5-mile course” was really 5.5, so I was concerned when my lungs felt maxed out with over a mile to go.  But luckily my legs responded as I continued to push them.  I was ecstatic to see mile 5 close out at a 6:53 pace. Now I just had to hold on!  I could hear the festival music seconds before I burst out of the woods and sprinted down the home stretch.  My team was cheering, and I had the satisfaction that not only did I support them well, but I managed to escape the grip of the Terminator who no doubt finished close behind.  I handed off the baton, had to be told to continue past the finish line because I literally stopped short as soon as I had made the transfer, and then had to fight the urge to puke all over the aid table.  After hiding behind the start tent for a few minutes to get some fresh air, I emerged victorious to high five my teammates.  An official 7:08 pace overall…I’ll take it!

Another highlight of the day was getting some additional miles in with my best buddy, Jeff Winchester, while he crushed a new personal best in the 50K.  It’s clear that the Southern Tour team has put a lot of thought into event logistics, including extending the 50K/50 Mile course into a 10-mile loop.  Although it incorporated the 5 mile relay loop, the ultra-distance runners had the extra 5 miles to themselves where they weren’t constantly being antagonized with “on your left” or “great work” (I was guilty of that one) as relay runners zipped by at the speed of heat.  During my time with Jeff I was able to see the rest of the trail while we chatted about all kinds of fun topics.  Then, with a few miles to go, I ran ahead to make sure I got pictures of his 50K finish.  I have found that there is not much more satisfying than witnessing people you care about accomplish hard things.  While he has conquered much bigger runs than this, being present to celebrate a new PR with him was special for me.

The only thing that would have made the day better would have been to have my wife, Shannon, by my side.  She was not feeling well so was not able to attend…and I missed having her there.  She is my biggest cheerleader and it is very rare that I am in that atmosphere without her.  It caused me to reflect and take it all in.  The more I thought about it, the more I realized just how alive I feel at these events.  Around other runners.  Around people that push themselves and embrace the painful challenge of getting better. And around her and my kids.  When I can combine the high of the running world with the love of my family, it’s like the stars align and all is right with the universe.  It is 100 percent, pure joy.

I went home and told Shannon that I don’t want to miss another Southern Tour Ultra ever again.  Because there are lots of races, but this isn’t a race…it is an experience.  The Southern Tour Ultra website describes the event as the “The Woodstock of Wilmington” and I would have to agree.  If you have been part of the magic, you know what I am talking about.  If not, do yourself a favor and get there in 2021!

Have a story from your favorite race or event?  I would love to hear from you!